So winter is over and the Mrs has decided she wants to start renovating our lounge. I have got away with my painting desk in the lounge for 3 years so I was due to be moved!!

The result is I have moved up 1 more level to the landing on the top level and am set up in a wee nook by the fire flue so be nice and comfy in winter, although going to be bit hot in summer(not because fire on but house gets rather warm in summer and no aircon on top level, and heat rises). Picture of new location below, still get a water view. 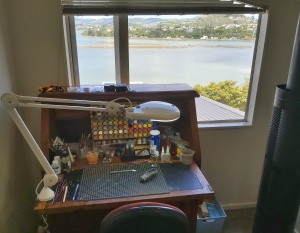 The last contributions I added to my Borodino Russians was 2 ammo wagons and an artillery command base. The wagons are the Perry horse artillery carts, I also had a Tool/Amunition wagon to finish but the driver was awful, had a big chunk metal moulded to his front and I gave up trying to slowly get it off. The command figures are Front Rank and have added gun barrel and wheel to base as is used as my artillery commander. If we make a grand battery(ie 2 batteries or more) we can assign a commander to them so they can operate independently. 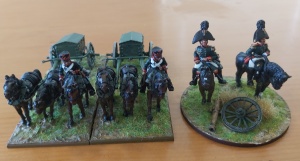 Been having a small break since Borodino game ended, focussed on some landscaping tasks and painting window frames for some shuttters we have just had installed. But getting back into some hobby stuff now and for a change not Napoleonics. The Hanomag on the paint desk is a give away, the next project is Bolt Action WW2 German force, in particular Panzer Lehr from 1944. Many decades ago a mate and I gamed WW2 in 1/76 and my force was Panzer Lehr. PaulW has lent me a wonderful book called ‘1 SS Panzer Corps at Villers-Bocage 13 June 1944’ by David Porter that has all the data I need to assemble and paint a force. I have been looking at some UTubes on how to paint the kits needed and last Xmas I got carried away buying what thought needed in all the various sales around, and of course the Mrs pitched in and ordered some online for me as a Xmas prezzie, bless her. So a picture of my kits is below, the infantry are under construction already.

Now Goldie and Nick already play Bolt Action so am expecting some lessons after Xmas, PaulW has a bunch of tanks stored in his ceiling(1/48’s) and Murray has 1/48 armies and some beautifully painted Grand Manner WW2 buildings so am looking forward to some games in 2021 been played by the group.

That’s all for now!