This years Call to Arms Convention is almost upon us.

As with last year we are running a Blackpowder Napoleonic tournament.

Due to Covid 19 we were restricted to 8 players again.

I have been playing with a Russian army but considering a last minute change to a French Guard force to balance off 4 French v 4 Allied players.

Practice games have been going on and some pictures are below.

Game between my Russians and Goldie Prussians…he had a moving gun line…you can just see the edge of it…I got a large unit Uhlans into flank of Leib Hussars….they turned to take charge ..stationary…so then sent a column into now exposed flank…Leibs went…poof…gunline went…poof…supporting cavalry went…poof…..poof….. Goldie had tried to move units to block what was coming…but they all refused….. 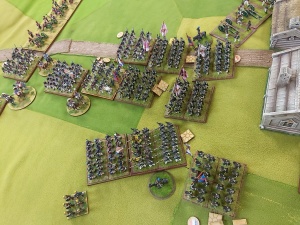 Another shot of the Rob v PW game……they really got stuck in…..

My set up in a game with my Russians and some of the new Hovels buildings. 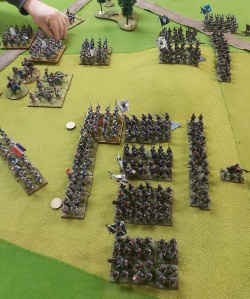 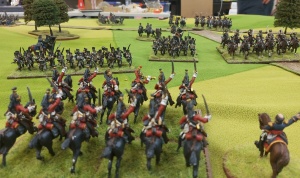 Last act of Goldies Prussians taking out PW trialling British force… it lasted 2 games and he went back to the tried and true Russians. Without a hill to hide behind…the Britz just get smacked.