The recruiting depots have been working away.

First up is a unit of Byzantine light cavalry that was 95% completed in Lockdown, however the shield xfers were faulty. Stephen Hales from LBM Studios sent me replacements free of charge and I have put the xfers on the shields and added a LBM banner. 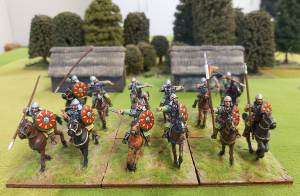 My Byzantine force now has 2 cavalry units, a heavy and a light and  1 unit Skutatoi infantry. Another heavy cavalry unit is on the painting table at the moment. All figures are metals by Gripping Beast.

Next up are 4 battalions of 1809 era Austrian Grenadiers. Figures are Front Rank with flags by GBM Flags. There were some broken bayonets on the figures, so I found a use for some plastic Warlord Prussian Landwher by painting their bayonets, cutting them off then gluing them onto the metal Front Rank figures. Happy with result. 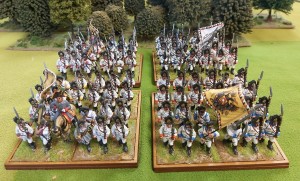 Last up are reinforcements for my Netherlands Waterloo force. I already have 2 Militia battalions and have added the 2nd Line Battalion and 35th Jager battalion plus the Belgian horse artillery battery Bichin. All figures are Perry Miniatures.

That’s all for now.