Rather than a 200 point game night I decided to give the Saltanovka scenario from Black Powders ‘A Clash of Eagles’ another go. We last played this when CoE first came out using the troop adjustments in CoE but for this game, used Black Powder 2 rules. I did make change of not allowing ‘Follow Me’ order but giving Davout, Compans, Dessaix and Raevsky special abilities and allowing them to be used normal commanders and not just having a Generals reroll ability. However, everyone forgot this for most of game…..annoying!

The evening was one of a howling southerly storm with gale winds  and driving cold rain but 5 hardy souls still ventured out.

Russ, Goldie and Robert commanded the French while PaulW and Steve the French. As a 3rd Russian player was required for later in game, I took that role.

Scenario is First Russian Army is attempting to cross the Dniepr River at Mogilev , however Davout has arrived there. So Bagration throws troops at him to see how strong position is, if weak, will smash through, if strong, will find another crossing.

The French are over the opposite side of the river, defending 2 villages in Fatova and Saltanovka. The French have 4 brigades, each of 5 bttns and 1 battery. They have 2 of the brigades holding the villages/river line, 1 in reserve to their right rear, the last off table as well as1 Chasseur and 3 Cuirassier regts off table.

The Russians have 2 standard divisions of 4 Jager and 8 Musketeer bttns each plus 2 light and 1 position battery each. The Jager start on table with the musketeer brigades/ artillery advancing on. They also have 2 brigades of 2 Dragoons each to arrive later on.

Russians get first turn. Objective is to take the villages and inflict as much damage on the French as they can, the French have to stop this.

View down table….Russian Jager skirmish line on right , Fatova which is held by Robert , Saltanovka in distance held by Russ and to left Goldie is sending the reserve brigade down to the French far left flank from its reserve position behind Fatova. Steve commands closest Russians while PW has those opposite Russ. I also placed 4 earthworks between the villages for the French.

View of Fatova with Steve’s forces arriving on table. 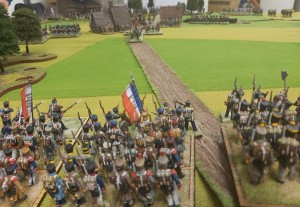 Far right of Russian position when PW has discovered a ford and is sending his columns over it.

Saltanovka where Goldies brigade has formed a firing line and is advancing on Pauls columns. The villages were supported by some earthworks.

Something not in the CoE scenario but one found in another. Russian 2nd Grenadier Division, which is my actual division arrive on a flank march…..as Goldie has sent the reserve brigade to other flank…the French had the Cuirassiers there…..so on a flank with woods and wheat fields…..perfect…for me anyway…..plan was to send briagde into woods…..shoot up cavalry til retired….and set up guns behind columns and retire some columns and shoot the c**p out of the cavalry…..alas ran out of time. Will need refight this on a weekend. 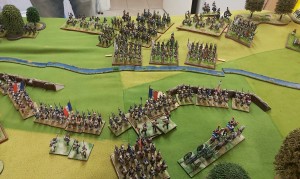 In the centre Russ reserve brigade has moved up and be hard to break through for Steve and Paul.

On far flank its is all rather in the balance. PW is taking it to Goldie….Russ still holds village and PW needs turn the flank. Dragoons in reserve if can get across the ford its fairly open for them. One again Russian columns are hard to take out.

And that was game called….will have to play on a weekend to get to a conclusion. French won this one in a canter, no villages swapped sides. No one used the abilities I gave the commanders…..will take a piece wood to next briefing so the French understand to use their commanders and the Russians understand they are meant to take the villages. Will need change setup as Russians need more depth so their guns do not set up within musket range of villages.

But was an attractive game, next time will have my new Hovels Russian buildings which are on their way from UK. Its a bday prezzie to myself, bunch painted buildings and plan having the woods finished as well.