Back in 2015 for the 200th Anniversary of Waterloo, the Group led by Goldie organised a multiplayer refight of Waterloo. This took place at the aptly named ‘Wellesley Hotel’ in Wellington, a venue which was a treasure trove of prints on walls of said battle. It was a rather large game, 50ish players, 1000’s of troops in varying paint standards and basing conventions! Goldie got Russ’s wife to sew him up to long base clothes for the 2 tables and he then painted them on his driveway to match aerial pictures of the fields at that time of year around the battlefield….Alan made card buildings to scale and the rest of group had hill making sessions in the then garage to scale.

It was a great success.

A few pictures are below, mine were on a laptop that died…these are courtesy of Von Peter. 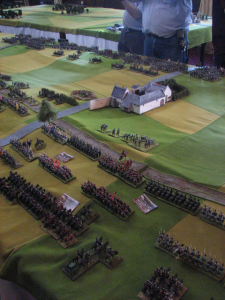 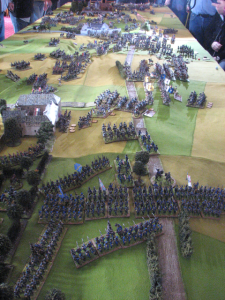 Prussians arriving at last and clearing all before them. Very nice Calpe figures painted by Rhys.

Roll onto 2020 and the Auckland Group which Garagegamer John has joined planned to put on a Waterloo refight. A few of us in Wellington Group decided we would head up for the game, and provide a large portion of the troops. A certain global plague has caused the delay of this refight(unknown future date!).

As I don’t collect British(they are a sideshow army) my contribution to the original game were basically French. However, as I was to be Prince Orange(with special rules!) in the original game, I obtained the Prince Orange and General Chasse figures from Front Rank and painted them. Feeling a bit guilty I also painted up the Dutch Heavy cavalry Brigade, mainly because I really like the Front Rank Belgian Carabineer figures. However, the Dutch ones I did not like so used Wurttemburgers!

The 3rd Netherland Division is commandered by Chasse(who will be on both the Prince of Orange command base and the division command base, he is a busy chap!). Initially I will be generating the 1st brigade only, if have time and motivation, will add 2nd!

The first 2 units ready for service are the 17th and 19th bttns. Pictures below(painted by Fernando Enterprises). Figures are Perry Miniatures, flags from Flags of  War, bases/movement trays from Battlekiwi. I am painting up the Perry, Dutch command figures from their range and quite like the Ghigny figure so thinking will add his light cavalry brigade so he can command it.

Production has ground to a halt as the bolts on my Superlux Magnifing lamp have sheared off and its a goner. New one ordered  but will have a few days respite before can paint again. Good news is my Front Rank order sent from UK on 21st April has arrived…..so can clean up the 2 command packs of Russian Musketeers for 2 completed bttns that are awaiting their commanders and get cracking on them when new light arrives!