So its now Wednesday 15th April and 1 week til Level 4 due to finish…be extended or who knows what!

Offerings today are from Goldie and Russ.

Goldie(Paul) took his family to the UK a while back for a holiday… when people took holidays overseas…..and not only attended the opening EPL game of season at Anfield where his West Ham was duly dispatched by Liverpool( and thanks again for the Liverpool scarf and coffee mug!) but he made a visit to Calpe Miniatures where he picked up some Prussians Peter had caste for not only Paul, but me! Paul has actually painted his troops…. mine down for a painting 2nd half of this year now my Russian’s almost done.

So after painting and basing his Prussian’s, then a handful of games Paul decided he didn’t like the basing job. Prussian troops are not exactly that colourful…..being dark grey, black grey, grey black etc …and when you make the bases rather….dark…..the overall effect is quite…dark.

So a rebase has now occurred. Paul also has chosen to break the general basing convention and have LARGE bases for his units. Looks rather good actually.

The force is from the Battle of Leipzig 1813, Army of Silesia, 1st Brigade of Oberst von Steinmetz.

It was composed of:

To this Paul has added the Cavalry Reserve of Generalmajor Jurgass: 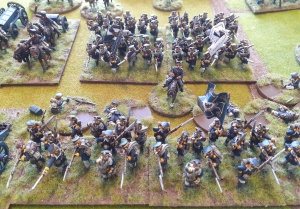 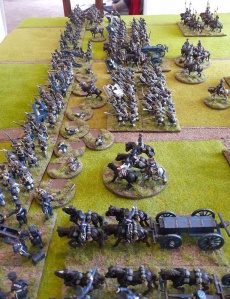 And finally Paul has sourced some 1813 ish buildings from a supplier in Poland which he is working on. Early picture below.

And the last part of this report is from Russ who has taken a break from painting Napoleonics and for something totally different…..

Needed a break from painting Naps yesterday so painted up this Project Z biker boss mini that Warlord Games dropped into an order a while ago. The bike paint job inspired by one published in Wargames Illustrated last year.

And that’s it for now….keep safe out there!