Its been a while since the last post, but MANY battles have been fought!

The army lists have been refined and added to, and we have settled on 220 points as the points value of armies.

The scenarios have now been developed(big thanks to John Hutton and Matt Fulmer) for these as well as the refinements on the army lists.

My latest game was using a Russian army v Keith and his French list. The Scenario being used was ‘Feeding the Grinder’ with set up and scenario rules below. 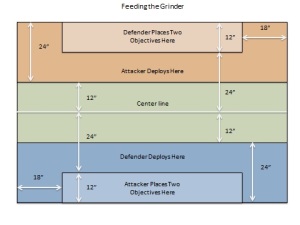 This is a meeting engagement scenario where both sides have encountered each other and continue to commit more troops as they come available.

Starting with the attacker, both players nominate half (rounded up) of their brigades to be placed into reserve. Starting on their 2nd turn, players will bring on one brigade per turn through the assigned area of their table edge. Units arriving from reserve make one normal move, measuring from the edge of the table. Charges, multiple and special moves, are not allowed. Troops arriving from reserve may shoot as normal after making a single standard move. All units must enter the table from a length of table edge equal to the diameter of their commander’s command diameter (i.e., we imagine that they were under command as they march to the table. They may move freely after that point as desired. Units may be in any legal formation with the exception of artillery, which must enter limbered.

The defender chooses a long table edge for their deployment zone. Starting with the attacker, each player places one objective no more than 12” from the rear edge of their opponent’s side of the table. Repeat with a second pair of objectives. A player’s objectives must be within 60” of each other. Objectives may not be placed within 18” of the side edges of the table.

The attacker and defender will both deploy within 24” of their table edge, as shown on the diagram. Starting with the attacker, players will alternate placing down full brigades. All units must be within command range of their brigade commander and may be in any legal formation. After both players have finished placing all brigades, starting with the attacker, both players place their CiC.

The attacker has the first turn.

There is no turn limit to this scenario.

Capturing an objective or breaking the opposing army will end the battle. If neither side achieves a victory in the time allocated then the match is a draw. Consult the scoring section to calculate tournament scoring.

I ended up being the attacker and Keith the defender.

My Russian force was:

Keith chose to set up on the table side securing flanks on a hedged farm and a wood.

I got the open terrain. 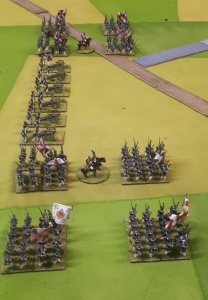 Above is initial Russian deployment. Russian artillery get 2 shots at long range so I set up at long range to get shooting advantage over French. 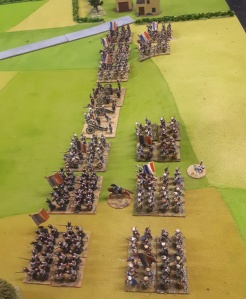 French setup, such a copy cat!

First turn and not surprisingly, I just fired my artillery which did some damage. Keith then advanced his columns and on my right, started moving one into line behind hedges. 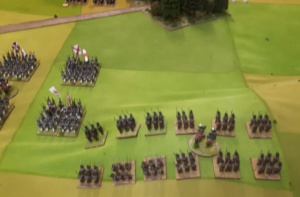 Turn 2 and my Jager move on. I think they were exhausted as didn’t do much else. 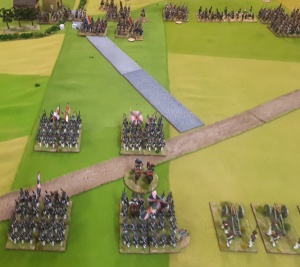 I ordered the left hand brigade to charge the French columns….one was disordered and had casualties so good odds beat it. Naturally they didn’t move…the whole game. 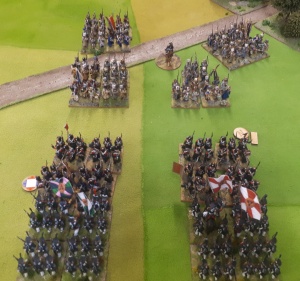 Keith  has gotten very gung ho – he charged my right side brigade! I managed disorder one with closing fire..from RUSSIANS! 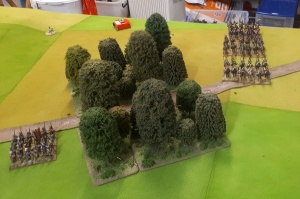 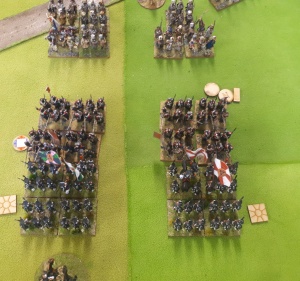 Combat and my right hand unit draws while the left loses but stays. 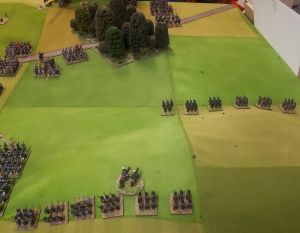 OMG! Half the Jager have moved! 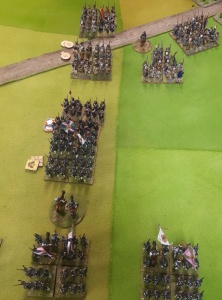 The combat continues. One French bttn has popped and the other lost but stayed. Its supporting unit to its rear has suffered fire from both batteries and is shaken and disordered. 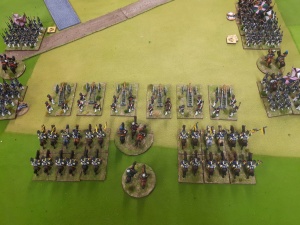 Russian light cavalry arrive, the Hussars behind the guns and 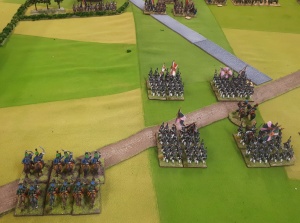 the Cossacks(ok.. Austrian Hussars, my Cossacks still on paint table). 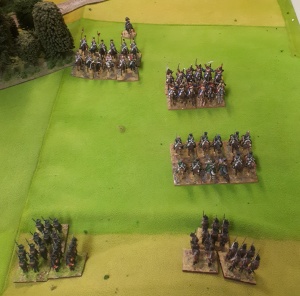 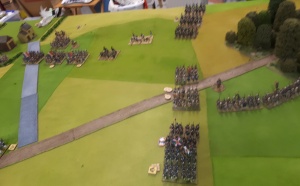 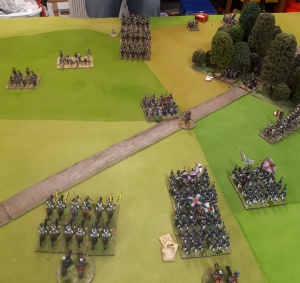 An after battle shot…the battle photo was a failure unfortunately. A unit Russian Hussars charged the column that had been shaken/disordered by gunfire in previous turn. It formed square, the Hussars charged in….inflicted 5 casualties, already being shaken and disordered, it popped. The Hussars then did a sweeping advance into the  small line unit, it popped. Break tested resulted in others popping or running. Brigade was broken! 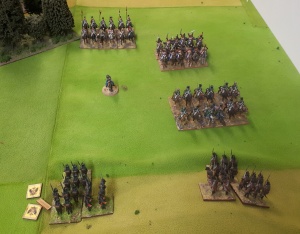 Before breaking however the French lines had shot up the left Jager square…and it had Lancers looking at it…. not good. 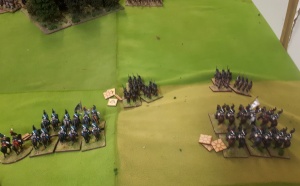 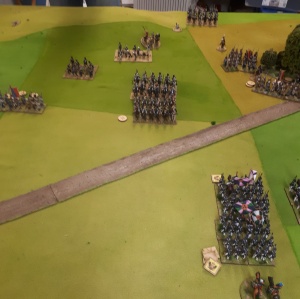 French Dragoons now had some fun. Charged my Hussars who had beaten up the infantry. We lost and retired, but they were shaken so also retired. Next unit of Dragoons now charged the guns. They got in with 2 casualties, wiped out guns, but suffered a 3rd casualty in the melee. So both batteries popped. But 2 units Dragoons now shaken. 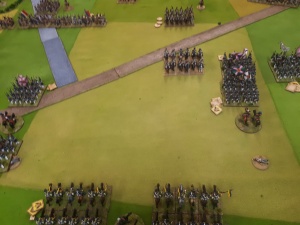 End of game which on scenario rules was a draw with 1 broken brigade each. My left hand brigade had still not moved all day. The right hand brigade was still intact but bit battle weary. The Jagers had suffered 1 lost unit but were free to move up on the light cavalry who couldn’t hurt them as no firepower or infantry.

It took around 2 hours to play so at convention would be a couple more terms at least available.