So dear old Goldie(Paul Goldstone) announced he would like to celebrate his 50th Birthday with a game at our local club, Wellington Warlords. Said game to be played on Saturday 6th April 2019.

The Coalition forces would be commanded by Goldie(Paul G) supported by me(Terry), Alan and Paul W.

The forces of evil would be commanded by Russ, supported by Simon, Rob, Robert, Von Peter and Grant. At the last minute Simon had to withdraw so Russ took over his command.

The French set up first. 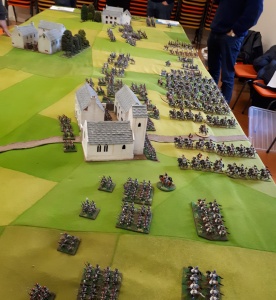 The French right commanded by Von Peter’s Poles with Young Guard to right.

Grants troops from the village on left to ridge and then Roberts troops from ridge to village to table edge. Robs cavalry in rear in conga column of march column. Now that was different.

Another shot of Roberts troops. 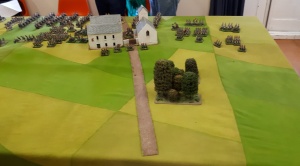 Allied turn one, Terrys troops march on in checker board formation. I had to bring the reserve grenadiers on early as Goldie managed to get his Avante Garde on…but nothing else and were rather exposed.

Unfortunately my camera photos of centre and other end of table from me tuirned out very poor…hall lighting and sun effect so limited shots can be used.

here we have Alan’s Prussians arriving in force and the start of PaulW’s Russian attacks. 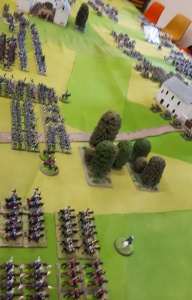 The Allied right where PaulW has a conga line of Russian infantry along with massed cavalry brigades. 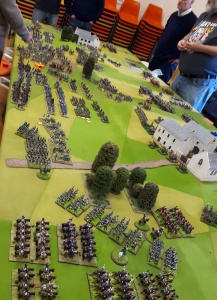 What a mess. Picture from French side of my Austrian on right and centre and Goldies on left. The buildings of the village have been removed as street fighting going on. At this point I announced Goldie was walking home due to his ineptude as a  commander. he had lost 2 brigades in an ill fated charge on village. A review of rules showed he had not if applied new support of units in combat rules correctly. But it stymied his attack for a while. 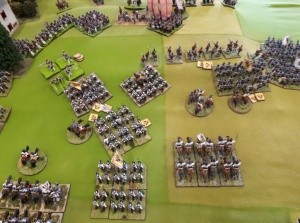 Village to Goldies front where he got in…Grant then counter charged and a lot of dice seemed to be getting roled for some time. 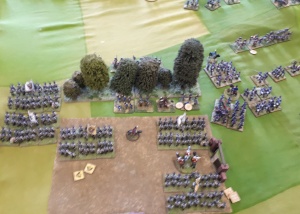 PaulW’s conga line supported by cavalry. French now moved Dragoon’s to support the infantry squares.  I understand the poncy Russian Cuirassiers felt combat was beneath them for most of the game and just sat and watched.

Austrian left and I am in part of the village and fighting for the rest. 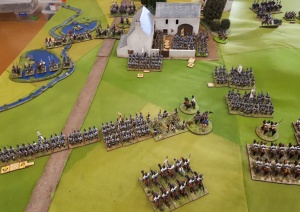 On open ridge to flank and a few units from both sides been cleared out. It was a meat grinder.

On the right the Russians look very pretty.

On the left the Allied cunning plan is coming to fruition( we decided this after the game). Russ committed his reserve of the Middle Guard and Guard cavalry/artillery to this sector and not where the Russians were crushing Robert.

On left Austrians have both parts of village, Russ thru some Young Guard into flank but were held and then countered to their flank by more Austrians…Vistula Legion then charged into village form far side but were held. In the end the Austrians held the village. 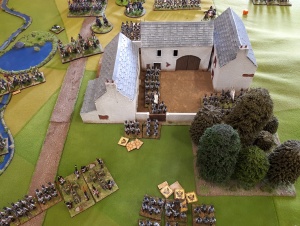 On ridge the Young Guard were eventually broken as were the Guard cavalry. A final charge by the Austrian grenadiers broke the Polish infantry brigade but in turn were broken. Polish Uhlans and Cuirassier’s had a wee tussle as well. The Middle Guard thankfully picked on Goldie!

The far flank village…buildings removed as units all over. Robert has been pushed out. 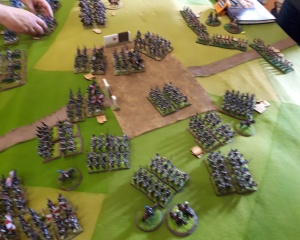 Goldies village….holding it at this stage but has a lot of damaged units and Middle Guard closing in. Grant has been pushed back. 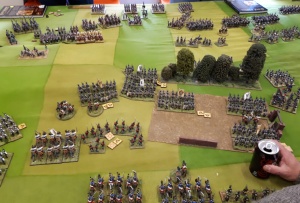 Right flank….last waltz of the French Dragoons. Gather French Cuirassiers other side of village weren’t keen on combat either. More ponces. At least my Austrians were good keen men. 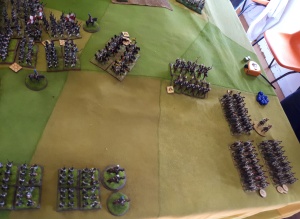 And that was Goldies Birthday Bash…successful win for the Allies who held most of villages and had broken more French brigades than they had lost.

Footnote: My new units of Vistula Legion and Austrian Grenadiers all broke…shameful performance.