Well, Steve is certainly in the thick of it……

Turn 8 and Steve is moving from Brie to Guignes, and Robert is moving from Mormant to Guignes…..with Oudinot leading and Marmont following half a day behind. So Steve has to stop the French from exiting Guignes as there is a large Allied force nipping at Marmont’s heels.

The Map is below. 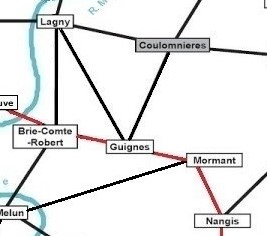 So we have a meeting engagement where the Allies have to block the French from exiting the table. If they succeed, the French are destroyed as the pursuing force will catch them. If the French succeed on getting away, both sides retire and suffer stamina penalties. It was at this stage it started to go wrong for the Allies as they interpreted the instructions as the French needing to exit to Brie and needed destroying where as all they needed to do was stop the French making it to the Northern side they were defending to win. DOH!!

So turn one and Allies arrive, Russians form up on right to attack French, Wurttemburg cavalry to their right flank. On Allied left the Bavarians are beside town. The forces of Oudinot arrive in centre and on their right flank.

So from set up Allies already in trouble, Bavarians needed to be covering French exit point at bottom right of picture below. Russians should have been on Northern side of river covering the exit to Brie road and not getting ready to attack the French before Marmont arrived!

What a beautiful sight, Russians and Wurtty Cavalry preparing to rush the French force as it deploys. Wee problem here ended up being, neither wanted to move, for most of the game! Must have been REAL THICK MUD where they were moving. Or rather, trying to!

Its a bit further on in the game, Russians have managed to go forward, then retire back over river….guns left behind as cannot cross river and the cavalry still won’t move! French who were clustered around village now starting to advance with Marmonts Ghost Divisions now arriving. I call them Ghost Divisions as they should have died at Nogent, but Goldie succumbed to French Bribery and allowed French to march away when were meant to stay and fight(and die!). 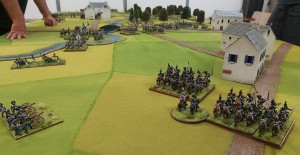 French flood onto the table!

Further along and the French have taken position on exit road to Coulomnieres. The Bavarians have barely moved all game and steadfastly refused to advance towards the French. I feel they still harbour a love for the Emperor Napoleon. So the French will be able to flee to Coulomnieres. 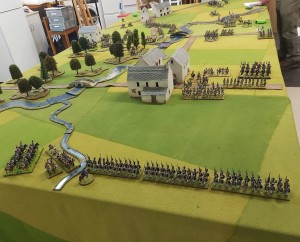 View from French side in centre at end of game. Some French have charged over river, got beaten in combat, stood then pushed Russians back. But it is days end and the French manage to escape  to Coulomieres and Wittgenstein retires on Brie.

I must admit I didn’t watch much of the game as partner had been away for few days so I adjourned upstairs to chat with her. But not much happened from visit to visit of game so we really need speed up the turns, was taking wayyyyy to long.

Now for something different….

So below I have added a picture of unit currently painting. They are Warlord Games Late War Legere where I have changed to a tan undercoat, then a wash rather then my normal black undercoat style. My eyes were getting too tired so decided to give a lighter colour undercoat a go. Once I have blocked in colours then using some Army Painter Soft Tones and washes I purchased. Early days but seems less tiring to paint and a different style of look….see how I go. Was planning to get more boxes of them but Warlord Games just slapped a 25 pound postage charge on all purchased, we were 50 pounds and post free. Global Supply chains and Brexit apparently, but will have to look to local online store for ad hoc purchases going forward.