So Goldie has been talking about an 1814 campaign for sometime, and over the past Xmas period he has rolled one out.

The French have 3 players(Russ, Robert and Rob), the Allies have 5 players(Terry, PaulW, Steve, Alan and Nick).

Goldie is the Umpire, Rulemeister and point of all communications. Rules are BP2 with some adjustments Goldie has made.

Players on the same side are only allowed to directly communicate if we have forces in the same nexus. We can communicate by sending ADC’s racing around the map passing messages between ourselves.

Below is the map we are playing on. 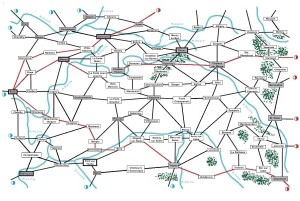 Each player is in command of a scaled down Corps. Each Corps has 3+ Divisions(2+ units) in it. Turns are are a day, split into Morning, Afternoon and Night moves. Each move is one town. Night moves can result in Divisions losing stamina.

It is VERY IMPORTANT to work out your order of march.

The 3 red roads are Imperial roads and 5 Divisions can move down them at a time, other roads are only 3 Divisions.

The Allies enter from the eastern edge, the French are somewhere on the map.

So its turn 1 and lo and behold, Osten-Sacken(PaulW) has marched into a nice French Trap at Vitry le Francois. Happily strolling down the road, they find Marmont in possession of the town and rapidly approaching what looks like Napoleon and Ney leading a Corps of Young Guard……the battle will be fought next week….report will follow!