Since the Aspern game we have had several games  where we are working through the new Black Powder ACW supplement ‘Glory,Hallelujah’. I have run 2 games based on scenarios from the book with some pictures from the ‘Bartletts Farm 1863’ scenario below. The rules have worked rather well and the games have the feel of an ACW period game. There have however been some discussions post last game around some issues which we are working through. These for us are number of guns represented on the table,we have used 1 gun per battery until now but are moving to 2 guns and 3 guns for the Union 6 guns batteries. There are also concerns around the difficulty in getting units to charge into battle but the more you read the more you understand battles were mainly firefights rather than mass hand to hand combats. 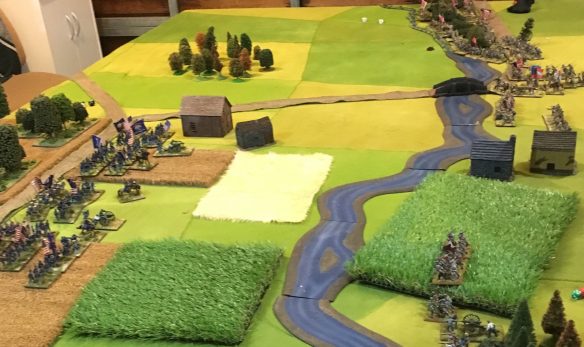 You may have noticed we try to have appropriate terrain in our games so ACW requires lots of trees and fences of varying types. The other night Paul G and Keith came round and we started a production line of fences. First offering in early stage picture is below. I have a Foundry ACW rulebook called ‘From Bull Run to Gettysburg’ which is just awesome with step by step instructions on how to make all types of  fences and even has tent templates.

And finally there are some pictures from an ancient game Brian Trott and I played last week using the ‘Hail Caesar’rules. Brian fielded his EIR v my Macedonians. My EIR are being rebased from WAB to ‘Hail Caesar’ so it is the unfinished and damaged from to many house moves Macedonians that were used. We fielded small armies to get a feel for the game. Standard sizes battles are fought between somewhere around 400 point armies.Brian fielded 270 points,I had 180. And yes I lost as Brian cleared both flanks of my Phalanx. Was fun and look forward more games. After loss consulted army list and identified what need to add to Macedonians to get to 400 points and also allow some variation in the army. So took advantage of Warlord Games buy 3 pay for 2 deal and ordered 3 boxes Companion cavalry. I have also assembled and undercoated a Warlord Games box 32 Macedonian Phalanx to give me a 3rd block. From Victrix I have I have added a unit of Hypastists and a box 56 skirmishers.These were ordered from Caliver as cheaper and no postage paid. Direct from Victrix I have ordered the decals.

Part of Brian’s EIR army. Back in early 2000’s we got similar forces,Craig painted and based them for PK for us. I am rebasing mine to similar sized bases.

Phalanx grinds on against legionnaires. Phalanx destroyed one unit but the Romans eliminated the flank supports.

Next week I have a game against friend Craig who is building a Greek army. It won’t be battle ready but we will use my troops and get handle of the rules.