On Saturday 21st May 2016 a group of 7 Garage Gamers met for a refight of the Battle of Aspern-Essling which was a 2 day battle fought on 21-22 May 1809 between the Army of Napoleon and the Habsburg(Austrian) Army.

The game was played at our local club, the Wellington Warlords. The battlefield was to be 20 foot long and 6 foot wide with a further table 12 foot long and 3 foot wide where some Austrian formations including the reserve would start the battle. All formations were scaled down and it was of course a 28mm figure battle.

The French forces were:

The French commanders were :

The Austrian forces were:

The Austrian commanders were:

The Austrian line battalions were large so they had 8 combat dice, 4 shots and stamina of 4. The also could form battalion masse meaning they countered as being in column, but if charged by cavalry they stood and took it rather than be required to try and form square.

We were playing day 2 from roughly 7am. By this time the French have thrown the Austrians out of the villages in some disorder. So the game commenced on a French turn with the French in control of both villages and the Austrian commands of Hiller and Rosenberg in a state of disorder so they would not be able to move forward in their turns.

Main table at set up. Rosenberg facing Essling. Humans are from left to right, Ray,Pete , John and PaulG. The village in the foreground is Essling which comprises 3 defensive zones. One being the famous grainary which for game purposes contains 1 bttn of French infantry who can fire 1 shot per down out of 3 sides. It cannot be harmed by shooting and it cannot be attacked. On the French baseline behind it the Danube makes a slight appearance and it cannot be be forded or crossed! A road then runs down the table to Aspern. French units to the south(French baseline side) are deemed to be unclear targets to Austrian artillery fire. Aspern also has 3 defensive zones and the church is treated as the same as the villages 2 zones. South of the village is the wooded/swampy area known as Germeinde au. 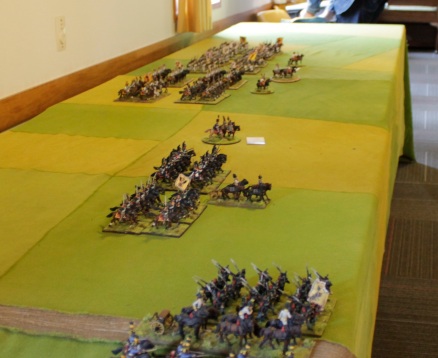 The game started with a French turn.

The French had Molitor in the Gemeinde Au,Legrand in Aspern and Boudet in Essling. The reminder of their forces between the villages.

St Cyr’s division on the right flank of Aspern advanced towards the Austrians, Claparedes conscripts then blundered and charged forward into the Austrians! Tharreau kept his conscripts back after seeing this. St Hiliare then advances on their right flank to fill the gap in the Austrian lines with the support of Lasalle.

Austrians reply by Bellegarde advancing on Aspern, Hohenzollern wheels to attack French advance. Around Essling Dedovich turns his battalions to face the French troops moving through the gap in the Austrian lines.

Lasalle send Hussars into Dedovichs guns, destroys them then sweeping advances into a battalion which had failed to turn and face them. Austrian CR7’s even with the +1 for being in masse still not enough get all to pass orderes.

PaulG wheels Hohenzollern to meet advances of St Cyr and the charge of Claparedes conscripts. Paul has units in combat.

Hiller charges into the Gemeinde au to get at Molitors weakened troops.

Lasalle and 2 Cuirassier Divisions flanked by Claparede and St Hilaire advance into the gap in the Austrian lines. 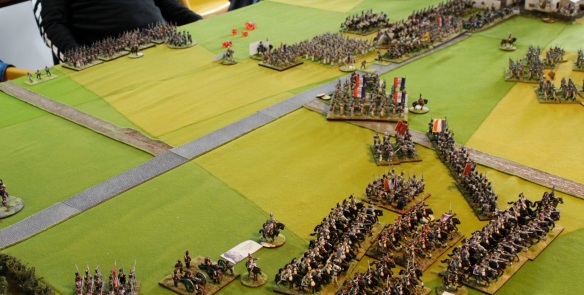 The bulge in the French lines as they advance through the gap in the Austrian lines.

In the Austrian rear Klenau on orders from Charles  moves towards the Austrian centre. Bellegarde detached Ulm’s division for the same purpose but after blunders, and failed orders they never made it past Aspern!

Hohenzollern had a battery enfilading the Cuirassiers in the centre so naturally Lassale grabbed a Hussar unit and with a ‘Follow Me!’off they went, unfortunately they suffered 3 casualties and failed their break test and failed to charge home but retired.

The French Cuirassiers charge into the Austrian Kuirassiers who counter charge!

A hint who won the combats…who is missing from this picture!

A further French Cuirassier unit now got charged to the front by Kuirassiers and in the flank by Dragoons. They lost the combat but were not destroyed.

Between the Danube and Essling Rosenberg advances to slug it out with Boudet.

North of Essling Dedovich keeps getting slowed by disordering fire from the grainary. In centre can be seen Klenaus troops arriving along with artillery from reserve and Kuirassiers taking on more of Lasalles command. 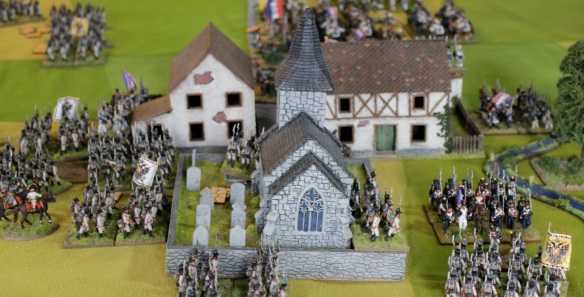 Austrian cavalry advance into the centre of the main table. The French are looking light on troops.

Who gave John Cuirassiers?  Austrian Infantry masse do not form square but stand and take a cavalry charge. They have a stamina of 4.The left hand unit has 6 wounds showing. That is not good.

PaulG’s face says it all.

View from Massena position. Austrian lines are thinning out nicely he will be thinking.

Rosenbergs advance on Essling has the french Young Guard commited exactly where the Austrians want them,away from the centre!

Further success for Hiller, Molitors command has fled the battlefield.

Oops, first tharreau used to plug cente, the French Cuirassiers rally and advance but now the Young Guard get a triple move and rush north of the road. At this stage Terry(me) handed over my commands to Russ who had been playing in a Jutland refight which had just finished.

You would think Austrian Grenadiers would go through French conscripts like a hot knife through butter. You would wouldn’t you. But being surrounded by poncy Young Guard and Cuirassiers they fought like veterans! 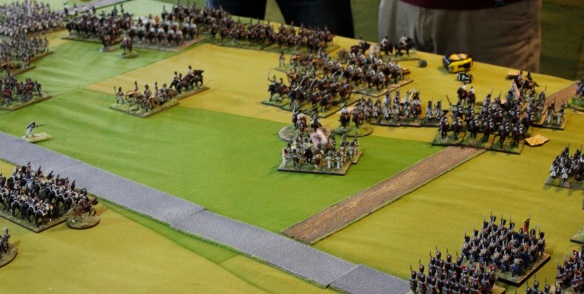 Until poof,it was all to much and a decent hole was in the French centre.

The day was done and the French still held Essling and Aspern was being contested. The divisions of Lasalle, Molitor, Claparede, St Hilaire and St Cyr were gone.

For the Austrians the main loss is Hohenzollerns corps where he faced the French centre. There were 3 intact divisions moving around Aspern to the centre and most of the Austrian cavalry was still combat ready.

Thats this report for now!(am sure to make some changes when ladz alert me to errors!)