I have already posted the official account of the Battle of Spremberg from our campaign scribe.

The following is my view on my part as Blucher and how I played the battle.

The original plan was for there to be 4 Allied players.

Murray was having his first game with the group and he was providing a chunk of the the Allied forces. Namely 2 beautifully painted full Prussian brigades plus additional cavalry units. All Calpe miniatures. In addition he had some Russian artillery and heavy cavalry. Naturally he was to be given command of the Prussian Guard brigade. I would then take the Prussian cavalry, whilst keeping a weather eye on Murray and also the Russian 3rd Division. Keith would get the 3rd Grenadier Corps, Paul the 5th Guards and they would share the Russian Cavalry. Yorke’s reserves would be arriving on 3 roads on the south baseline at some stage.

However, at the last minute Murray withdrew, but like the good chap he is, he let me use his troops. So I switched to gaming Prussians and Keith took over the 3rd Division. Paul went all meglomaniac on us and took the rest of the Russians!

The Allies would set up in the green section of the map above, the French set up in the blue section.. The town of Spremberg is on an island on the River Spee in the centre of the table. On the east side of the river at that point was a Schloss. This position plus the bridge over the river was worth 9 points, each of the other bridges was worth 3 points each. The river was fordable, but not by artillery which had to use the bridges.

So my initial set up plan with the Prussian Guard was fairly straight forward.

The aim here was to initially force the river at the south bridge and get across with the cavalry to threaten the French flank, then move infantry across in support with the horse batteries. Once that was accomplished, to then assault Spremberg. Once the reserves arrived to use 4 Prussian bttns south of Spremberg, 4 north and 4 in central reserve. Dolffs cavalry to also move to central position and the Russian Dragoon/Hussar divisions assigned to me to move also to central position.

Prussian reserves, Yorke has a command rating of 9!

Russian reserves, assigned to me are the Dragoon Division of Lapuchin and the light cavalry of Tchernitchev.

The picture above is looking down the table from behind french deployment zone.

Paul has his massed Guards/Grenadiers/Cavalry in our deployment zone facing away from the River Spee preparing to meet the arriving Eugene. 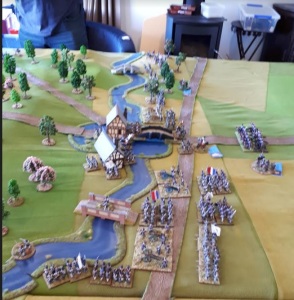 Alan played the roles of Reynier and also Davout when he arrived. He is defending the river line with bttns in Spremberg and the Schloss. 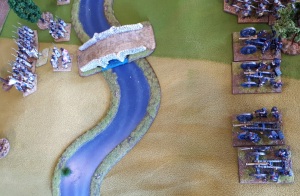 Turn 1 and the Prussian horse batteries on the south edge. A French battery was opposite them, briefly.

View of the advance of the river. Cavalry to south, horse batteries at river, Fusilier brigade heading towards Spremberg and Grenadiers towards river line. Russian batteries on ridge heading for Spremberg and on north side of Spremberg, Russian 3rd Division. 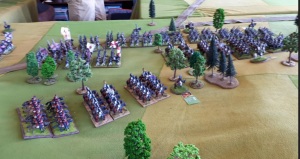 Another view of Paul marching to meet the dust clouds announcing Eugenes advance. This did not go well…the Russians failed orders and did not get in position in time…and when combat developed…they performed…well…they all died…that really says it all!

The defence of Spremberg, defending bttns , artillery support either flank and supporting bttns. Tough nut to crack. In the north crazy Russians have rushed forward. The problem with the Russians is they have a lot of brigades of 3 units. Which means they break easily, but in battle terms every broken brigade gives 5 victory points to the other side in addition to 2 points for each destroyed unit. It does not matter how many units in the brigade. So a look through the French orbat and you see mainly 5 or 6 bttn brigades. So Russians losing 2 brigades, which has the same combat strength as 1 French brigade means we are at -5 battle points for equal number of destroyed units. So we need to try and rotate damaged Russian divisions before they break if possible, whilst focussing on taking out entire French brigades.

Keith being a wee bit to keen! 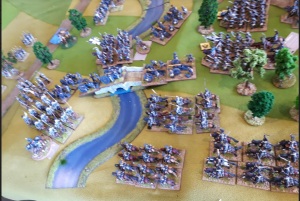 Attack in the south. Uhlans have charged French bttn, they have formed square…..horse batteries are now flooding across the bridge…setting up at close range to the square. Infantry moving across river in support with 12lb battery moved to river line. More cavalry moving up to support the advance.

In the centre the Russian batteries are advancing on Spremberg with infantry moving up. 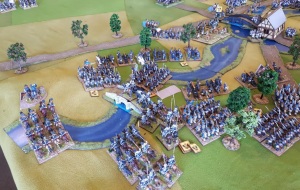 The square was shaken by the horse artillery, so the Uhlans were able to charge it, destroy it and sweep on to the next bttn which was also destroyed. The Uhlans rallied back as sustained 3 casualties, and I moved them eventually back over river to be by von Bulow so he could rally the casualties off them. The Hussars then moved up and across the river. The 2 heavy cavalry units failed their orders with a blunder and withdrew 1 move.

In the centre the Russian batteries are shooting up the Schloss, and to the north Keith is charging in! 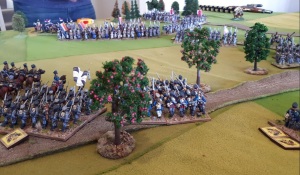 Just when its all going to plan….ALL the French reserves come on early! Here comes Davout(22 bttns, 2 batteries) and unfortunately over other side of battlefield, Eugene arrived as well.:(

In the centre, Fusiliers have taken the Schloss and pressed on to attack Spremberg town. The French battery in foreground just would not admit defeat .. my guns just could not damage it. To north Keith’s troops are pulling back as Davouts 2nd Division approaches him and word of the disaster occurring to his rear reaches him.

Prussian version of the Mexican standoff.  Prussians are 32 figure units of metal figures v 24 figure units of plastic Perrys. I think it scared the garlic munchers a bit. 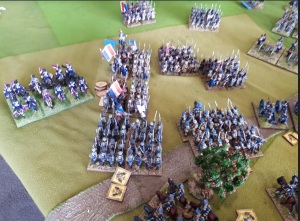 In the south, Davouts lead brigade comes charging in with the Polish Uhlans from Reyniers Saxon brigade giving support. Prussian guard are a hard nut to crack. 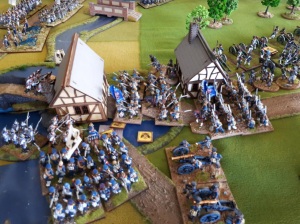 Enough of this, threw another bttn into the Spremberg combat. This worked and took town. To north 3rd Division is in peril and the Russian batteries have been moved to hold the line. 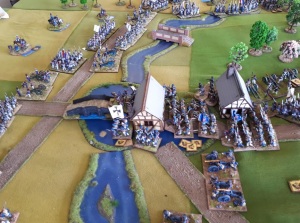 Spremberg taken. This also resulted in breaking the Saxon brigade so the Polish Uhlans also had to withdraw which eased pressure in the south. There are a LOT of French in the north!

In the excitement, I stopped taking photos for a couple turns….after a series of charges by Alans reserves in the south…which were held… I got my heavy cavalry and horse batteries into action again and gradually took out units(8 in one turn) which resulted in collapse in the south for the French. 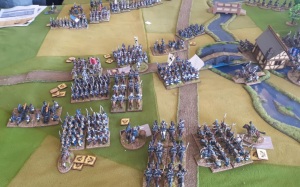 End game in the south…Prussians are rolling up the flank. By this stage Yorke was on the table however rather than the initial plan…1st Brigade was used to replace 3rd Division in the North, part of 2nd Brigade is supporting the attack above and remainder is helping stabilise Russian lines. 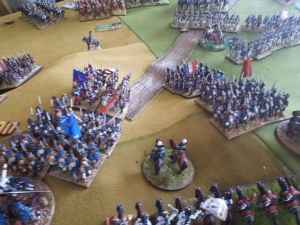 In the Russian combat area…..Eugene has largely defeated the Guard/Grenadiers and is pushing on. Russian reserves are arrived and blunted the initial attacks. Above have used Prussian cavalry to force the Old Guard into squares and then charged them with infantry. Actually won a combat against them and they broke. I did lose a Grenadier unit though…was locked in combat and got flank charged.

Prussian 1st Brigade to North of Spremberg holding the line!

And that was it.

The Prussians had a good 2 days at the office…after recoveries Yorke lost a Grenadier unit attacking the Old Guard(got flank charged while fighting Old Guard) and Blucher a horse battery.

The Corps of Reynier and Davout suffered following losses after recoveries post breaking:

A good day at the office for the Prussians.