So Call to Arms is over for another year and our second BlackPowder competition has been held.

Unfortunately our 8 player competition at the last minute went down to 6 with Goldie forced out with urgent house repairs(water leaking in sons bedroom wall) so I dropped out to make it an even player event.

So we were left with 3 French players and one each of Russian, Prussian and Spanish.

After 4 rounds, 2 on each day and where most games went to or close to the time limit of 3 hours, the podium winners were:

Paul W has volunteered to run next years competition. 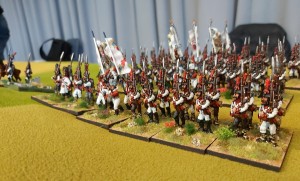 Some of Brian’s Spanish 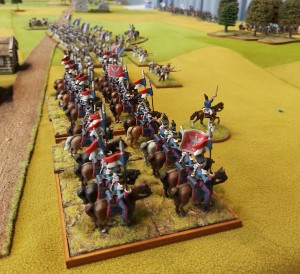 Shot down line of French advance

Only other thing of interest over the weekend was the Team Yankee and in particular taken by German force…. tempting. 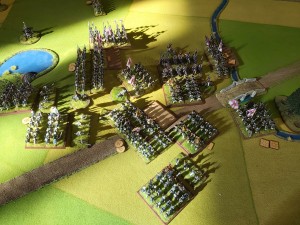 last round game between John and Paul….. this scrum when out for sometime as more and more units were fed in….the game ended with the French breaking and Paul stealing 2nd place.

And the last round game between top 2 had Brian and his Spanish up against Nick and his Prussians. It was a hard fought game but ended in a draw which gave Nick 1st place and Brian dropped to 3rd place.

This is an example of a French 200 point force.